In life I have always needed that one friend who shares my passion for traveling; who is the go-to person when everyone else has backed out. After finding such a friend when life decided (after all these years) that it was time for us to part then the first thing that came to mind was, “Dude Gaurav, we need to go for a trip together!” It was this feeling combined with failed attempts at trips with other people and the coming together of three like-minded stooges that a trip to Nag Tibba was decided upon. 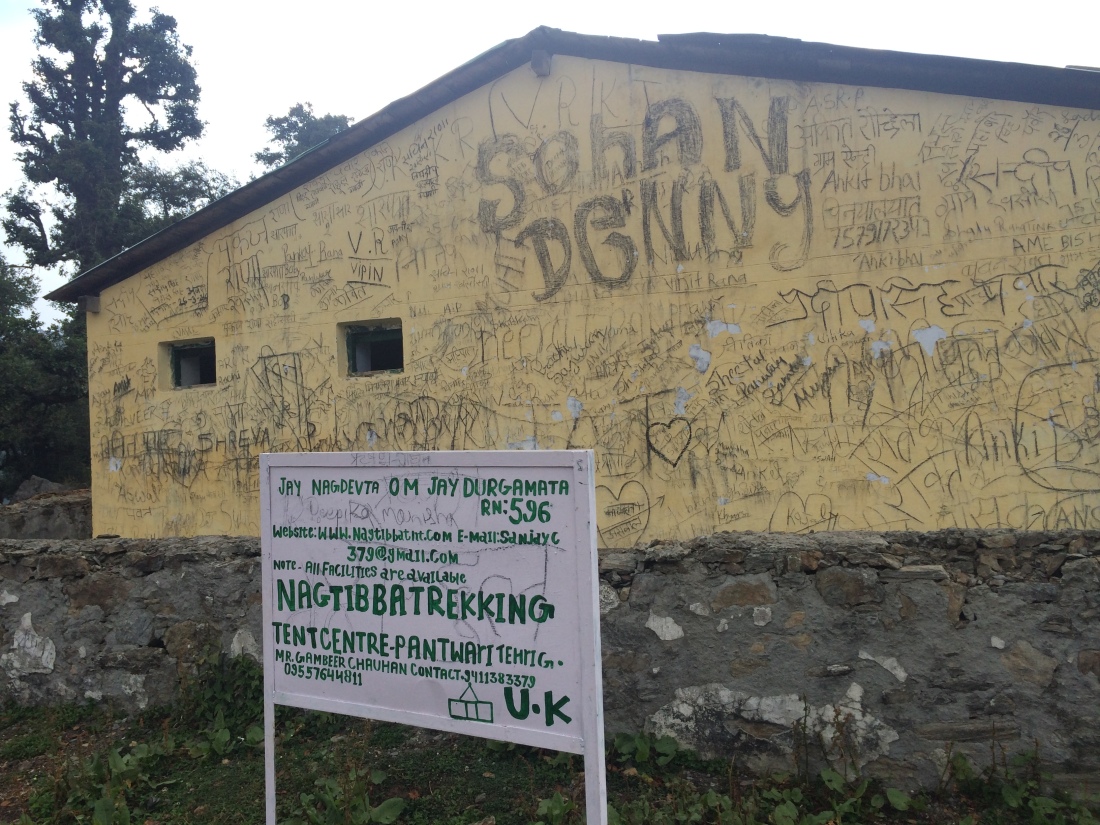 How to reach: From Dehradun take a bus to Panthwari (or to Nainbagh via Vikasnagar; the bus via Mussoorie should be avoided for reasons of traffic; private taxis ply from Nainbagh to Panthwari). You can start your trek from Panthwari itself or from the Goat Village. 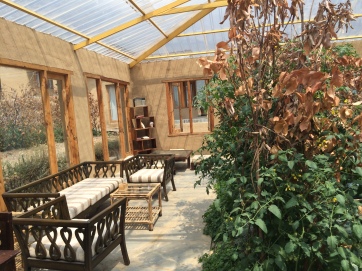 Where to stay: If you’re not traveling with India Hikes or a similar group, and if you don’t have your own camping equipment then The Goat Village is the ideal place to stay. Located beyond Lasser Gaon it is conveniently located for the trek. Most importantly, it is run by some of the most helpful and cooperative people I have ever come across. Our trek would not have happened but for Purnima and Ravi’s constant support.

Reaching Goat Village: From Panthwari/Nainbagh a taxi will have to be hailed to reach Lasser Gaon. From there it is a 2km (approx) trek to the Goat Village. Apart from amazing home-cooked food made from locally grown vegetables, the people at Goat Village will take ample care of all your needs and any other help or support that you might need during your stay. It’s hospitality at its best. (Details below)

Other Information: India Hikes organizes treks to Nag Tibba after 2nd July and it was for this reason that we had to figure out logistics our self, which basically meant no logistic got figured out! 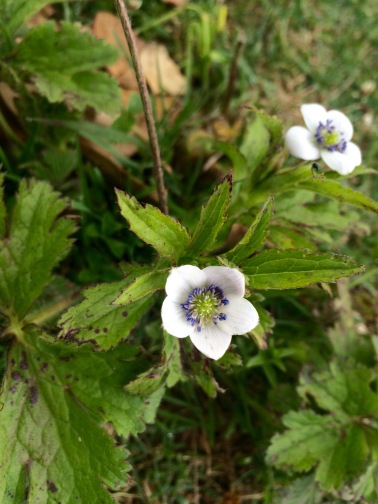 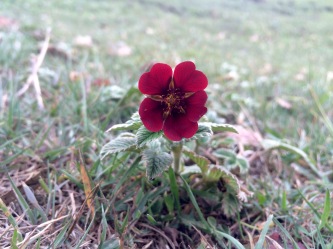 It was a fine Wednesday afternoon when the idea of a trek to Nag Tibba was in its formative stages on the office lunch table. Vaibhav, Gaurav and I discussed a few nonsensical and irrelevant things and decided to ask around. One thing was final: We are going this weekend. The amazing part was that nothing more than this got finalized till we left for Dehradun!

The Friday evening that we were supposed to leave for Dehradun, all of us came to office with our bags packed; but neither bus tickets were done nor any planning whatsoever about how this thing was going to work out. During lunch we booked bus tickets for Dehradun and decided upon one step at a time approach (whether it worked or not would require deep introspection!). The lack of planning was embarrassing to the extent that we stopped asking others to accompany us. Saturday morning saw us at the ISBT, Dehradun figuring out the mode of transport for reaching Mussoorie. A few inquiries later, we took a bus to the local bus stand near the railway station and were Mussoorie bound. When in Mussoorie, we did what a tourist is supposed to do: lookup on Trip Advisor for the best eateries in town. This is where the story of the clash between Fate and Murphy (of Murphy’s Law fame) begins. 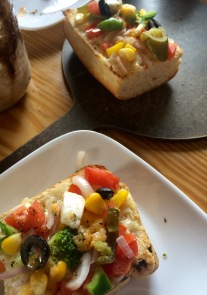 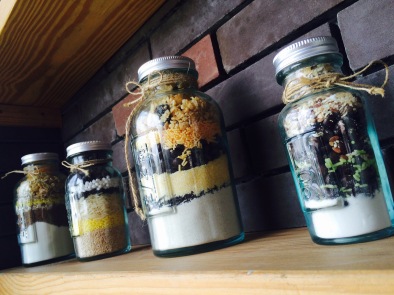 After zeroing down on Little Llama Cafe we walked through the crowded lanes of Mussoorie to reach our destination and decide upon the ever-present question of what-next. Upon reaching Little Llama we were told that there was no electricity so there shall be a delay in their service. While Gaurav and Vaibhav wanted to leave, I wanted to stick around. It was amidst this dilemma that the man on the next table (with his two young daughters) told us that we would not find a better place to eat in. Having struck a conversation, the topic of Nag Tibba was brought up. We were pleasantly surprised to learn that the man, Dr. Manish, was also headed to Nag Tibba with his daughters. While he could not offer us a ride to the place, he did give us Purnima’s contact and told us about the Goat Village. Amazed at our lack of planning, he wished us luck and left with his daughters in tow.

After multiple failed conversations with different adventure camp organizers, it was not with a lot of gusto that we called Purnima. But when she informed us that our stay could be arranged then our spirits rose somewhat only to be brought down by the taxi union fellows of Mussoorie, who are profit maximizers of another league altogether. There are two taxi stands in Mussoorie: the Picture Palace stand and the Library Stand. While Murphy took us to the former (which was the incorrect one to be in) Fate informed us of the latter through a conversation with Ravi (Purnima’s colleague). While Purnima and Ravi were trying their level best to get us a taxi that would take us to Lasser Gaon, we managed to find a cab at reasonable rates to take us there. In the process we lost some 4 hours and reached Lasser Gaon at 6:30 pm. From there to the Goat Village was a trek of some 2 odd kms that we covered in two hours, taking breaks, cursing Murphy, watching the surroundings and getting lost in the dark. When we finally reached the Goat Village sometime around 9 pm, we felt relieved that the trek was finally going to happen. Thanks to the ordeal that was Mussoorie, I had given up hope on anything good coming out of the trip.

After a sumptuous dinner of roti, toor daal, gobhi and broccoli and a local kheer, we sat outside our hut gazing at the night sky and talking about life in general. Above all, we were relieved at having made it so far and found shelter. Our back up plan was to sleep in the open meadows, which was no plan, but that was what we had decided upon before embarking from Gurgaon.

The Goat Village provided us with a guide for our trek, who carried toast, tea and water for us in case we needed it (as I said: hospitality at its best). After a few initial hiccups, we were finally en route Nag Tibba summit. The trek through forests and meadows is relatively easy in that there is a well defined trail. The last 2kms (from the temple to the summit) is quite steep. The amazing flora and avifauna (which included red headed trogon, birds of the bee-eater family, bulbuls and lineated barbet) that kept us company throughout the trek made the experience ethereal. Our conversation about things that traveling taught us kept me thinking of the trips made so far and the lessons learnt. After reaching the summit when the clouds started closing in, it only rendered the fruits of our labor so much sweeter.

We then started our descent back to Goat Village. Murphy and Fate were still having their war at our expense. When we reached Goat Village at 1:00 pm, we were wondering how to reach Dehradun before nightfall. It was then that Ravi figured out the logistics for us: there was someone who was going down to Panthwari, and we could hitchhike with him. So far so good. Soon after lunch Gaurav and I started our trek towards the blessed Scorpio. In the process we got lost, received a call from Vaibhav that he was almost there (he had taken a mule due to trekking side-effects!) and faced the prospect of not only missing our bus to Dehradun (from Nainbagh) but also getting caught in torrential rain, what with black clouds (literally and figuratively) surrounding us from all sides. When we could not find our way, we looked around and saw a white Scorpio parked on a mud track, a kilometre down from where we were. We then gave up all attempts at finding our way and instead ran and jumped through farms to reach that blessed vehicle before the clouds decided to let the rains fall. The last jump that brought us on the muddy track where the Scorpio was parked was accompanied with the beginning of the anticipated rain. We ran towards the car and were presently joined by Vaibhav riding his way to glory (and the Scorpio) on his mule.

Our car took us to Panthwari, where another car was waiting for us to drop us to Nainbagh (courtesy Goat Village). From Nainbagh we were supposed to take a bus to Dehradun but after reaching the place we realized that we had missed the last bus. That I will stand on the road asking passers-by for lift was a scenario I had always imagined; this childhood dream finally came true! From begging truck-drivers to accommodate us to asking people around for a way to reach Dehradun, we tried everything we could. Finally Fate sent its agent in the form of a gregarious bloke driving a Bolero to Dehradun. Accommodating us in the dickie, the affable driver was our companion in this penultimate leg of our trip. The amazing playlist in the car (spanning everything from Ankhiyon se  Goli Maare to Chura ke Dil Mera) and the uber social driver (who inquired about the health and well-being of every driver along the way and had an opinion on the driving skills of everyone he overtook) brought us all entertained and thoroughly exhausted to Dehradun, from where we booked our bus for Delhi. And thus ended one of the most unplanned trips I have been on.